Dr Christian and the Cartesian Dualism of the Gender Identity Debates 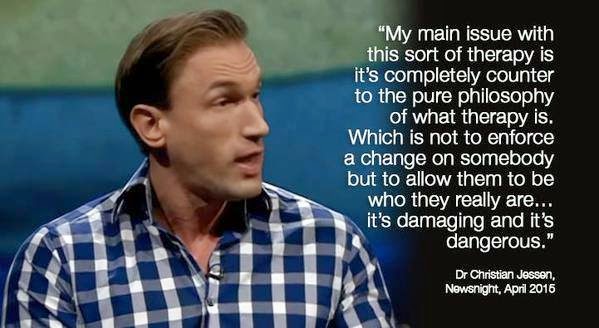 Implicit in the discourse of gender identity is the understanding that the mind, or inner feelings produced by the mind, is who we “really are” – the body is at worst an irrelevance, at best a malleable vessel or tool for the expression or performance of the true person within, a person who has a distinct and stable “identity” irrespective of the physical conditions imposed on it by the incidental body. This view is called dualism, specifically Cartesian Dualism, after the philosopher René Descartes. There is a hierarchy built in to dualism: the mind is the real human being, the seat of reason and conscience. The body is just so much dead meat. To alter the mind is a violation; to alter the body, a trifle.

But it turns out the body and mind don’t work like that. The former is not some inert Golem for which the latter is the magic, animating scroll. To the best of our current understanding, the mind is an emergent property of complex interactions within the brain that are entirely and completely physical. No special substance, no stuff of thought, is circulating around your scull cavity, “being” you. Your mind is not something that is, it is something that your brain does. A process is a better way of thinking about it; or even, according to some philosophers, a mostly illusory effect.

Brains, as we all know, are not independent agents knocking about in the world. Your brain lives inside your body, is an inseparable part of the complex system of interactions and symbioses that make up the entire animated, sentient entity that is you. Your brain eats the same food as you, it breathes the same air as you. It gets sick when you are sick. It goes through puberty when you go through puberty – worse, in fact, the whole damn thing is its fault, because it kicks it off to begin with. Your brain “hears” everything that is said to you. It is a full participant in the process of conditioning, education, learning, trauma, memory, preference building and socialisation that you undergo. The brain does not “store” who you are – it becomes who you become.

When you learn a new skill, like how to do Sudoku or even something much much simpler, like the exactly correct level of pressure it takes to push a thumb tack into your particular office wall with its unique density & resistance, your brain physically changes. It doesn’t change “in order to” store the leaning, or “as a result of” the learning. Learning is a physical change in your brain. A small group of cells inside your head is creeping towards other cells as you read my words, making minute contacts, touching in ways that were not happening before, creating tiny chemical bridges that hadn’t existed before. These tentative little gropes towards learning will be reinforced in the future by a teeny tiny release of dopamine if and when you remember the words I typed here: your brain bribes you with little chemical highs, that’s how it gets you to continue to learn throughout your lifetime, navigating new roads, figuring out the timer on new microwaves, remembering the names of new nurses in the nursing home – unless something goes seriously wrong (as in the case of Alzheimer’s or CJD), your brain-that-is-you is a hive of cell growth and reconfiguration every day of your living life, every bit as much as your gut is (more, if anything, because so much of what the gut does is outsourced to your microbiome, whereas your brain is mostly you).

Changes to other parts of your body will, eventually, become changes in your brain. It will learn to feel itself anew (although it can sometimes struggle with that, as in the case of phantom limbs – and it really should be investigated whether post-operative trans people ever suffer from that debilitating condition). It will reconfigure itself (I hate the term “rewire” – such a limited, stunted metaphor for the virtually infinite curlicues and arabesques the brain/mind is capable of) in order for you to walk a certain way, talk at a certain pitch, use particular hand gestures. Your body will not magically “fit” a pre-existing image of your true self in your mind: if you change some parts of your body, another part of your body – that part of it that is in your skull – will continue to change until you can preform the gestures and mannerisms you consider appropriate to your new body seamlessly and without deliberate effort, like a skilled pianist plays scales or an experienced driver goes through the motions of the familiar morning commute. This level of so called "unconscious" skill is the result of well-developed pathways in the brain, which is just a fancy way of saying that your brain has physically changed a lot in order to facilitate them.

If you change your body, your body will change. There is no other “you” out there – or in there – for you to model those changes on. If you really believe, like Dr Christian, that the talking cure is a kind of “conversion therapy” for one part of your body, then the “chopping cure” is exactly the same thing – just conversion therapy, trying to force your body to be something it currently isn’t. And that includes the part of your body that generates your mind, or the amorphous, nebulous thing that is your “identity”.