It's a feature, not a bug


Laurie Penny writes persuasively in the New Statesman about the interesting dynamics that lead to young women performing better than young men in education and the entry level stages of their careers. The argument is, in essence, a simple one:


This is, basically, exactly true. Not only are girls socialised to be more docile, more complying, more self-effacing and less demanding, making them model employees for third world sweatshops and first world offices alike, they are also, and importantly, taught to invest the vast majority of their self worth in external indicators. By which I mean to say that there is an exponential list of approval metrics for young women, against which they are supposed to measure their right to exist in the world: weight (which should always be higher or lower than it is), beauty, popularity, numbers of sexual partners (which should always be higher or lower than it is), grades, the explicit approval of teachers and parents, and so on and so forth, for ever.

There is, by definition, no finish line or goalpost at which one can stop and say "I am good enough", for even if one's grades, breast size, boyfriend's income level and smoothness of hair are all exactly compliant with prevailing standards, there's always the possibility of cellulite, visible pores, or the exactly wrong length of skirt to let one down. Striving for perfection is as fruitless as it is mandatory - what Amanda Marcotte called "The Hermione Effect":

Young women are supposed to get serious sooner. This isn’t a mystery to anyone paying attention. Over and over again, we hear about how young women believe they should get straight As, be in perfect shape, be perfect in every way and make it look easy---supergirl syndrome. This also includes graduating college in 4 years. Young women didn’t just collectively decide that this was how it was going to be, you know. They’re picking up on expectations put on them.

Most companies today operate what they call a "meritocratic" system of employee evaluation and promotion. What this means in principle is that they don't get sued for gender discrimination. What it means in practice is that they define some arbitrary set of positive attributes, then make everyone prove that they measure up. The slight flaw in this set up from a young woman's point of view is that the attributes are usually rigged to be ones that are associated with men (assertiveness, decision making, risk taking, confident presentation etc.), and not having them is exactly the reason why young women get hired over young men in the first place, especially in a recession. So for a given subset of talented young owmen graduating from university today, having a job and being successful in it are mutually exclusive categories. Oh yes.

And that's even before we attempt to tackle the problem of how, exactly, one would demonstrate that one is indeed confident, decisive, risk taking, assertive and ambitious without falling into the following trap: 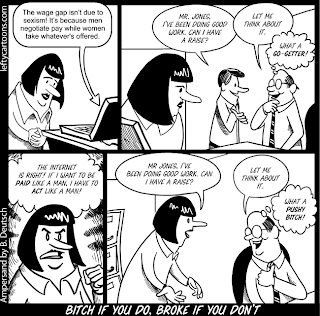 
You want a literary catfight? The Guardian will give you a literary catfight! Wait, you don't want a catfight, of any kind really? Well, tough boogers. You're getting a catfight whether you like it or not, because that's what women do! Even when they're not actually doing it!

DJ Connell writes a pretty straight-up and sensible article about why she dislikes the label "chick-lit" and writes humour under an gender ambiguous moniker. So far so good. There's no big time attack on the content of mainstream chick-lit novels. The word "pink" isn't so much as mentioned. Sophie Kinsella doesn't come in for a bashing.

But still, in a postcript to the piece, the editors in their wisdom offer this bit of forshadowing:

"I write chick-lit and I'm proud of it": tomorrow in part two of the chick-lit debate, author Michele Gorman responds to DJ Connell's criticisms of the genre

Wait, what? Have you actually read the preceding few paragraphs? Cause I did not see any "criticism of the genre", only of the unhelpful and sexist label and the all-too-real marginalisation of female humorists.

But I guess you can't, if you're a national newspaper, go out in public and suggest that women may have nuanced and varied views on subjects close to their hearts; that would be almost as bad as admitting that they're actual human beings with, like, opinions and shit. And we can't have that now, can we? Gotta make sure those caricatures of cat-fighting shrews are upheld!
1 comment: