More on work, women, and who is expected to do what


I wrote about women's work recently, and ever since then people have been sending me examples of how that work is hidden, ignored, defined out of existence and so on. It's really a fascinating subject: a dedicated ethnographer could make a life's work out of it. Random example: a Royal Soceity lecture about Dorothy Hodgkin (Britain's only female science Nobel laureate), her career, and why X-ray crystallography is considered "women's work" within the sciences. Another notable expert in this field is Rosalind Franklin, the woman whose work was indefensible (and uncredited) in the discovery of the double helix structure of DNA.

It's interesting finding out about women in the past whose work went anacknowledged and unrewarded, but it can be equally instructive to find clues as to hat is considered work int he first place. This morning I worked at my desk stnding up for 3 hours, which we are all supposed to be doing now because it's so much better than sitting down blah blah blah. I unashamedly admit I'm only doing it to burn extra calories so I can sneak a slice of cake at lunchtime without losing my patriarchally approved sice 10 ass, so don't look to me as a source of healthy lifestyle inspiration.

Anyway, I Googled around to see how many calories three hours of standing burns (answer: 99. Hardly worth the trouble), and in the process I found a calorie calculator on the website of the British Heart Foundation. In order to be able to calculate how many calories you've burned, you need to choose an activity from a pre-determined range, divided into headline topics - dancing, running, sports etc. - illustrated with cute little animated GIFs. I'll give you one guess what image was chosen to illustrate the "household and garden" category. 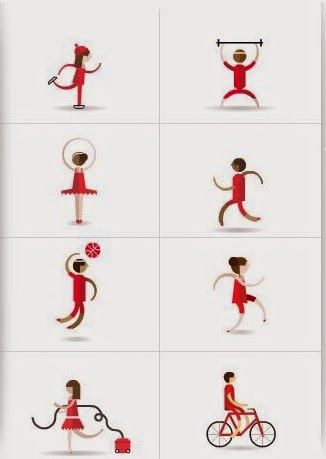 It wasn't the little dude with the bicycle, let's just say. Anyway, that wasn't the most unpleasant surprise (in any case one could argue the BHF are only reflecting, rater than creating, an unfortunate social reality in which the majority of domestic labour is performed by women). Once selected, the category unfolds into a long list of activities - cleaning, vacuuming, cooking, playing with children, and... Well, see for yourselves. 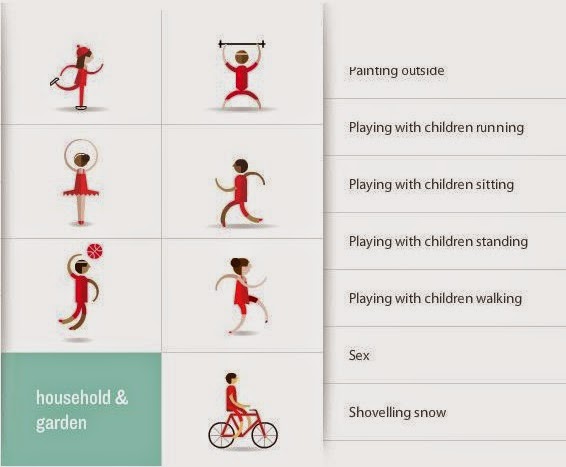 I admit even I did a double take here. I mean, how likely is it that the British Heart Foundation is channeling Dworkin's claim that sexual access is something men extract from women as unpaid labour, by force? Well, not very, right? I don't know that there's been a separatist radical feminist take over in any major UK charities lately.

No, what's more likely to be going on here is this: the BHF is slotting "Sex" in with house painting for two reasons: they think only women would be interested in anything to do with housework, and they think women would only be interested in sex as it pertains to weight loss. They'r really playing up to two negative stereotypes about women: that we are the natural performers of housework and domestic labour, and that we don't really like sex, lacking an authentic libido and engaging in sexual activity only as a means to achieving secondary aims such as securing the affection of the men in our lives or, as in this case, losing weight (probably as well as securing the affection of the men in our lives).

What's interesting though is that in this case a middle of the road, quite anodyne adherence to popular myths about women has inadvertently lead the BHF to reveal a much deeper and mroe disturbing truth, namely that sex is something men demand and expect from women, and if we don't provide it willingly ('willingly' meaning in this context passively - enthusiasm is not seen as a plus), they often see themselves as entitled to take it by force. Sex is work for many women in this society - not just the ones who turn to it as an actual source of cash income, but also the ones who lie there time after time, staring at the ceiling and thinking about all the house painting and child playing they will have to do tomorrow, hoping that at least he might finish quickly so they could get some sleep. That hackneyed description of a sexually unhappy relationship is not just a picture of commonplace unhappiness: it's a portrait of what it is when one's very body and mind are subordinated to the work one is expected to perform on behalf of others.