Today is the anniversary of the death of George Orwell, so it seems like a good day to tackle a topic that he is famous for defending: free speech.

I’ve never read much Orwell, I must confess. Donnish and, despite his internationalist aspirations, unremittingly English, he is not as revered outside the English speaking world as he is within it. If you asked the average French person who their emblem of freedom of expression was, they're much more likely to say Voltaire. Were you to pose such a question to a Russian intellectual, they may very well say Solzhenitsyn. Or Vysotsky, as like as not. Or “what is this free speech you speak of”.

But anyway, Orwell is famous for free speech, right? Everybody knows that: Big Brother, surveillance, thought control, language manipulation, bad bad stuff.  So, here we are.

It happens also that today is when the always hotly anticipated satirical news magazine Private Eye's latest cover comes out, and this is the image they’ve gone with: 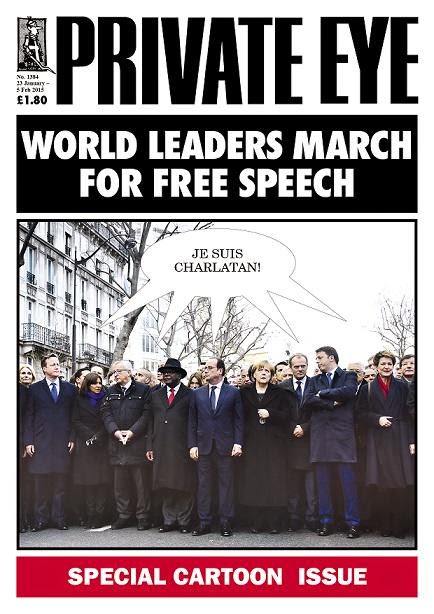 Oh, those rascally World Leaders! So hypocritical in their solidarity with the French Nation after the massacre of free-thinking, free-wheeling satirists, when in their own country they imprison and kill journalists themselves! How comical! Let’s all be wry and cynical about it in the best tradition of English humour!

Funny, that (not funny ha-ha): that this joke is coming from such a very English publication. After all, similar criticism could have been leveled at the assembled country heads from the Asian-British humourous weekly, or the feminist Viz, or the… Oh wait. There is no Muslim Private Eye. No Arab Charlie Hebdo. No Afro-European Viz, no Feminist Rory Bremner, no Orthodox Jewish (or, God forbid, Zionist!) Voltaire poking fun at the post-WWII pieties of a prosperous Western Europe, sanguine in the knowledge that we’ve done the Holocaust now, it’s so 20th century darling, We Shall Remember and It Will Never Happen Again.

One does rather wonder. Well, no, actually, one really doesn’t. White men have the vast majority of the money, power, influence and education on this continent (sorry Brits, I’m lumping you in). They always have done. They get to say what goes, and frankly they get to say what’s funny, too. And even if it were to so happen that an Afro-French comedian were to amass the money, the following, the influence and the media visibility to really start taking the piss, well then he’d just… What’s that? Get arrested, you say? Barely days after the whole world was up in arms about freedom of speech & how important the French tradition of irreverent humour was? Surely not!

I’m Jewish, which means there’s not really much love lost between myself and Dieudonne M’bala M’bala. Frankly, he creeps me out. But I am unquiet to a degree unmatched by the many self appointed (male, white) champions of freedom of expression that France is expiating its Dreyfus &Vichy guilt on his particular African back. Like, thanks and all that, but no thanks. I’ll handle my own anti-Semitic comedians – the nice gentlemen of the security service could perhaps better employ their time providing Hebdo-style round-the-clock security to my sisters who are speaking truth to male power and encountering the terrifying Heckler’s Veto of death threats backed up by publication of their own and their families’ addresses, employment details and banking information.

It’s not as if women in aren’t killed by men on any given day, is it. Or for that matter, it’s not as if Muslims aren’t killed by drones, occupying armies and so called “peace-keeping” forces sent by the West, like, all the time. Atleast 160 by just this one guy, according to a Clint Eastwood flick that opened "surprisingly strongly" at the weekend despite being the most blatant, virulent anti-Muslim propaganda seen in years. And Clint wasn’t even trying to be funny. Why, one wonders, aren’t Iraqis living in the US provided with NSA bodyguards?! I’d sure want one if I were them!

But then again America is a law unto itself, with its constitutionally enshrined free speech and its tradition of free press and its absence of laws banning any kind of speech or expression. I mean yes, if you’re a black protester holding his hands up and chanting “Hands Up, Don’t Shoot”, then the police will tear gas and arrest you. And you’ll get called a terrorist by people on TV. And your protest will be reported as if it had been a riot. But look, if you’re a large corporation run by white men, then your freedom of speech is protected by the Supreme Court, so it’s all good, right? Freedom of speech is obviously A Thing! That exists! And people have it!

Yesterday I saw this news item in passing, about a teenager arrested in France for sharing this spoof Charlie Hebdo cover (I have my own suspicions about what colour teenager that was): 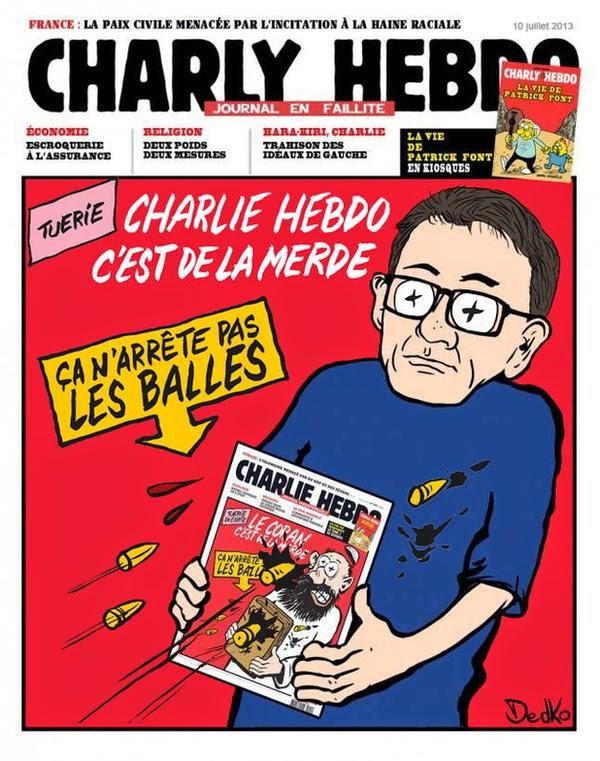 I thought it was rather good, mostly because, unlike almost all the Charlie Hebdo cartoons I’ve hitherto seen, it’s actually funny (especially in context). Freedom of speech, it says, is no protection against actual violence. The pen is not literally mightier than the submachine gun. And as if to prove the point, the lovely chaps of the Nantes constabulary hauled in this kid for sharing this on Facebook.

I mean, c’mmon. The double standard here is so eye-bleedingly blatant I can’t even find words to write about it. It seems so thumpingly obvious that freedom of speech must be extended to all lest it be functionally withheld from all that I actually don’t know how to bring this paragraph to a close now.

Except, I guess, to say this. If, in the immediate aftermath of the Charlie Hebdo murders, your instinct was to mount an impassioned defence of the right to offend in the name of freedom of speech, then you weren’t only defending an ideal: you were also defending a status quo. And in that status quo, actual freedom to speak is not an equally distributed resource: rich white men like Rush Limbaugh and Nigel Farage have it, and pretty much everybody else doesn’t.

Satirical magazines like Charlie Hebdo and Private Eye stand for that status quo at least as much as they stand for the principle which they nominally embody. I’m sure the men who run these publications are perfectly nice liberal guys who think that freedom of speech is a splendid thing, Orwell, Voltaire, yaddah yaddah. But this doesn’t change the fact that they are heard that much more loudly and clearly against the background of silence from all the people who are not them.