So this thing has been making the rounds on Facebook, asking women to post the colour of their bra in their status in order to "raise awareness" of breast cancer. Just to be 100% honest with my readers, I did it - I'm a sheep, what can I say. But having done it, I'm becoming more and more convinced that, not only is it a stupid thing to do on a forum that I share with co-workers, but that cutesy little "campaigns" like this are actively damaging to both feminism and women's health.

The feminist angle has been exceptionally well covered by Jules at Feminazeri, so I'm not going to go into that here too much except to quote the following passage:

Call me a humourless Feminazi if you like, but this email is not about raising awareness of breast cancer. It's about using a disease that has a devasting impact on the lives of hundreds of thousands of people as a spurious justification for discussing saucy undies. It's about women trying to show that they're uninhibited and up for a laugh by inviting their friends to speculate about them in their underwear rather than to think about them as sentient, intelligent human beings. It's about women objectifying themselves.

So, at this point it's pretty meaningless to say that we don't need any more breast cancer awareness. Because, seriously, not only can there not be any sentient being within reach of a major news outlet still "unaware" of breast cancer, but most of them have by now probably also been made aware of the fact that we're reaching a critical mass of awareness at which all breasts in the world spontaneously explode from sheer attention overload. We get it. Boobs are important. Enough already.

Anyway, what does "awareness" mean, exactly? Are the pink ribbons away of reminding women to be afraid of breast cancer? Not unlikely. Women living in constant fear of violence/disease/poverty is a feature, not a bug, in a patriarchal paradigm of domination. Is it about making sure men don't forget that women are identified with their sexual organs, and not entitled to actual personhood? Hmm, again, that would be consistent with available evidence. Other than those two, I'm really at a loss to see what the hell point there is in any of this.

What is it about breast cancer that makes it so worthy of awareness-raising in the first place, I wonder? It's by far not the number one killer of women - that's heart disease (which they die of disproportionally, because the treatments and diagnostic tools are all based on how men experience the disease). It's not even the number one cancer killer of women - that'll be lung cancer. What it is, of course, is the number one cause for damaging a part of women's anatomy that men (in the sense of "the patriarchy" as opposed to individual men, as always) actually care about. Once this interloper is spotted, it must be tamed, beaten, wished away, driven out, before it manages to besmirch those precious lingerie filling funbags, interfere with our one-dimensional definitions of femininity, mess up our understanding of how women ought to relate to their bodies (our understanding that they ought not to, that is - that those parts of women's bodies that are sexual are publicly owned and those parts that are not range from irrelevant to unspeakable).

But I digress. We are, we can I hope agree by now, too aware. Aren't we?

Look at this picture, for example - it is the news section from the Cancer Research UK website: 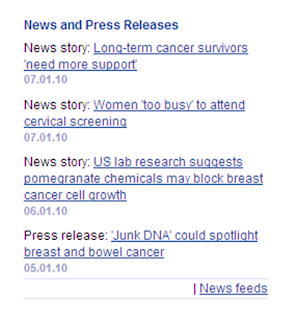 Does anything look a bit wrong to you? No, I don't mean the bit about blaming women for being too lazy and stupid to make time for smear tests. Look again. No?

OK, try this: the following is a quote from the Against Breast Cancer website:

The Against Breast Cancer research programme is looking at secondary spread, when cancer cells travel from the breast to other, often vital, parts of the body to form additional cancers. Through our work we want to improve the care, treatment and survival rates of women with, and at risk of, the disease.

In other words, we are aware that women get cancer in their lady lumps. We're aware that they will need painful tests to discover it. Aware that they will have to go through dangerous surgery to remove it. Aware that they'll probably need chemotherapy treatment to finish it off, treatment with such terrible side effects that some say it is worse than the disease. Aware that they will lose their hair, possibly lose parts of their bodies - but that's OK because we can, we're aware, make them replace those lost bits with plastic hair and plastic breasts, to make us feel more comfortable around them. We're definitely aware that buying pink stuff and running in races wearing pink t-shirts will raise money to feed the surgery-and-awful-drugs merrygoround, and since it claims to save lives, we're aware of our moral duty to keep it going round and round.

But are we aware of how to help prevent women having to be in this situation in the first place? Nope. We, as a society, want women to be fixable, especially those parts of their bodies that are considered public property (the sexy and reproductive bits). But we don't really seem to give a damn about them not breaking in the first place. Or not suffering more from the fix than from the breakage. That's the sort of awareness I would like to raise: awareness of the fact that breast cancer awareness is bullshit. It's dangerous, cruel bullshit that helps feed an industry that mutilates and torments women in the name of curing a disease it doesn't know if it's causing (there is evidence that HRT - a treatment designed to "fix" women "broken" by the menopause - is implicated in breast cancer, as well as the radiation-filled mammograms themselves).

Well, to hell with awareness. To hell with papering over the pain and mutilation the disease causes and calling that "survival". To hell with chuggers and co-workers getting money out of me that ends up going to the sweatshop owners making all the pink plastic paraphernalia or to the drug companies that are so obviously part of the problem (and deeply invested in not cutting off the disease at the root - there is no money in healthy women). To hell with it all. You want my awareness? Fine. I hereby undertake to remain aware at all times of the fact that women suffer, women fund raise, women run, women buy, women wear wigs, women stay positive, women cry in secret, women feel ashamed, women can't find clothes that fit post-op, women hope, women wait - not because of breast cancer, but because of the additional burden placed on them by "breast cancer awareness".